Writing this a little hungover from The Imperial !!

I've been told my reviews are rather long (!) so here's the edit -

Marc Morris did us proud!

Great clips. Loved the montage at the start. That MP was a right character. Mad as a hatter, but we love characters.

Still, what an idiot for what he did. But with the passing of years...

The academic was a star - as he said;; the government line and the research presented; all lies. Mostly. OK then - many lies!

Nicely directed. Jake West, legend! A member of the audience said this is his best movie (!). He told her there could be a sequel.

Best bit of Q&A - academic man V bbfc man ; academic man won! He tells us to beware the new BBFC and the 'public consultations', and we must; the British Board of Film Cutting is snipping again, a new government, a new/ old BBFC. They will regret pissing off an army of smart and clued-up horror fans at the UK's main horror festival. What a place to start cutting and ruining our time.
We won't forgive - they are stupid, we are not. Be afraid, be very afraid....

Good to see politicians, police, BBFC, directors etc all featured in the wonderfully produced and slyly subversive documentary that treated everyone with respect. Oh boy do I want to check my DVD and VHS collection again to make sure I have all the nasties present and complete. But I don't think I have Nightmares In a Damaged Brain. Maybe that's a good thing? Snuff clip - hilarious. Saw this on telly a while back. Hilarious then too. But as the documentary showed, they often believed it was real.
And we found out that dogs are at risk from horror films. The BBFC need that for their public consultation. Or should that be their public lavatory? Probably the same place. So much information, I can't remember everything!!

That documentary was loud, fun, informative, shocking, uplifting, clip-heaven and sad - very sad, the speech right at the end brought a real tear to my eye. Do the others involved - all those talking heads - also have passion or is it just a job? Nearly all I think are for real. A couple of talking heads were there for the ride perhaps. Or were a bit boring. But the ones I really liked; Bryce, Newman, Morris, were brilliant. I love Marc Morris in a purely platonic kind of way; I think he's the best horror expert we have in the UK. Maybe now the chapter is closed. This is definitive. We can still debate and talk and let's please have another Video Nasty festival like last year. But for now - the book is closed.

Oh and I bumped into Norman J Warren on the way to the toilets - nobody mentioned on stage that he was in the audience, he's more of a living legend to be than Tobe Hooper; he's also a great talker. He should have been on stage. Never mind. We did get a (censored censored censored censored) person from the BBFC instead!!!!

Loved the doco and the q and a session afterward. But have to say that Tobe Hooper really needs to flesh out some of his responses! After his q and a on Friday and this session I seemed to get the sense he really wasn't up for much discussion.
Top

Really enjoyed this one. Brought back many memories from the early 80's. I've still got some of those old Daily Mail articles stashed away some place. God I hated (and still do) them and all their collusion with Whitehouse and Thatcher. The whole thing was a scam from the start with Graham Bright as the fall guy. If it all went wrong then the government could say it was just a private members bill and nothing to do with them. If it went 'right' then Thatcher and chums could claim all the credit. It certainly worked for Bright as I see he's got a 'Sir' in front of his name now. Martin Barker was the real star of the documentary though. And the Q+A after. God bless him. If it weren't for his dogged persistence in digging up the truth and making people aware of what was really going on then... still, that was 30 years ago now. Let's hope the recent change of governent doesn't bring/force a change of thinking at the BBFC and they start going all draconian on us again. The warning signs (A Serbian Film) are certainly there. Felt a litle sorry for the BBFC guy on the Q+A panel though. He's been coming to Frightfest since the Prince Charles days and if you chat to him he's quite honest and down to earth about what he does (and the people above him). There have been and no doubt still are people at the BBFC who deserve a boo or two for their blinkered views but he's not one of them. Excellent documentary though. My only 10/10 of the whole Frightfest.
Top

Thought this was an excellent documentary - well done Jake and Marc! Martin Barker is a star and a very brave man. I only hope there are more out there like him - I have a feeling we are going to need them.
Top

Totally agree with you halloweengirl. Martin is now my new hero.


Sent from my iPhone using Tapatalk
Don't cry, it's such a waste of good suffering
Top

Many thanks for the encouraging feedback everybody, it's much appreciated and I'm really pleased you all enjoyed what you saw.

The version of documentary that will be appearing in the box set will most likely be slightly longer than the version screened at Frightfest, and the box set itself is shaping up very nicely indeed. I think we're looking at something like 9-10 hours of material altogether (that's trailers, intros, cover art galleries, logo show and documentary)!

Definitely enjoyed it: the video nasties hysteria is always interesting and Graham Bright insisting that horror movies can affect your dogs is a joke that never fades. But isn't it preaching to the converted? Was there anyone in the audience who's actually pro-censorship?

Nevertheless, I 'll probably pick the DVD up; a companion piece to Ban The Sadist Videos.
http://streetrw.blogspot.com - For all your occasional film rambling needs.
http://twitter.com/streetrw - For when you really need to know what I had for breakfast.
AND NOW: SKYPE!
Top

Enjoyed the documentary which was good. Dont think the discussion added much though.
Top

Absolutely the highlight of Frightfest 2010. Despite having read (and written) lots about the Video Nasties phenomenon myself previously the documentary brought all the facts and feelings together in a fresh and fascinating package - brilliantly edited, great choice of interviewees, an exceptional amount of 1980's TV news footage; striking just the right balance of academic authority and old school exploitation ballyhoo. Awesome work Marc & Jake! Can't wait for the DVD. I just wish that the panel discussion could have gone on for 4 or 5 hours rather than 45 minutes.
Read Narcan's horror, sci-fi, exploitation & dirty movie reviews at the Grindhouse Cinema Database:
http://www.grindhousedatabase.com/index.php/User:Narcan
http://www.facebook.com/grindhousedatabase
Top

Fantastic. Took me right back to my childhood and my Video Nasty watching days. It was a wonderful trip down memory lane as well as very informative. I learnt a lot watching this documentary. One of the best things I watched at FFest which I really was not expecting.
BLANCHE: You wouldn't be able to do these awful things to me if I weren't still in this chair!

BABYJANE: BUT YOU ARE BLANCHE! YOU ARE IN THAT CHAIR!
Top

Excellently made, thought it was a great doc. Martin Barker came across very well in the Q&A too - well done to him for always being able to be so calm about something he has such passion for!

Have to say, fair play to the chap from the BBFC for going on stage for what was going to be very tough for him given feelings around the subject - he did well considering what he had to work with from his employer's point of view and I appreciated that he contributed like that. I may not agree with the standpoint on many cases (some of my concerns, also based on some communication I had with the BBFC several years ago, tend to revolve around ensuring consistency) but respect him hugely for describing the actual process - it's one that can be used to improve matters, with this kind of debate, knowing what paths to take are critical!
"There is no Good, there is no Evil... There is only flesh..."
Top

Love Martin too and the doc was pretty good, although I think I must have seen an almost identical one before as I already knew almost everything that was brought up in the film...
Twitter @goregoregirl
Top

Missed this one unfortunately, does anyone know if the doc will be released on DVD or if it was just a special put together for the fest?
Thanks
Top

djwoody wrote:Missed this one unfortunately, does anyone know if the doc will be released on DVD or if it was just a special put together for the fest?
Thanks

it will be part of a Video Nasty box set coming out later in the Autumn.
There is no delight the equal of dread

It's available to pre-order on amazon now in fact 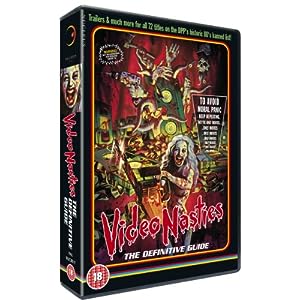