6/10 - Let down by the ending - too much time in the hotel, then didn't use the house/museum again and suddenly we're done. The last kill seemed unnecessary. Making the entire story into issue #1 of an ongoing comic series would not be sensible.
Top

The dialogue was snappy and there were some fun performances but I was never a fan of the originals so getting me to like a reboot was always going to be a challenge. The little guys just aren't convincing and/scary
Top

Overall I liked this one - you pretty much got what you expected - but the ending was a bit of a let down.
Top

As a Puppet master film, it was shite, but as a film about killer puppets, it was alright.

I thought this one was great fun. Really enjoyed it. Sure, it wasn't a mind blowing, instant classic, but it was really entertaining.
Top

I never thought the original puppet master films were any good, so this reimagining had a low bar to clear. The script is much better than the direction and camerawork, but they at least do what they need to do; setting up the situations and allowing the special effects guys to deliver the gory murders and funny puppets that the film promises. Some of the gory murders are done really well, in particular a shocking scatalogical beheading. In contrast to a lot of slasher horror films, the characters are all well-drawn with unique personalities and S. Craig Zahler puts in a lot of witty dialogue that keeps the film moving and gives it a good pace. The ending is the weakest part as it settles for setting up a sequel rather than resolving the main plot - this really is a big negative in the context of the film because it leaves the viewer unsatisfied with the story. 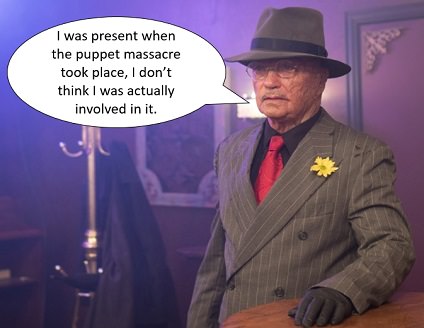 The effects were very good and very near the knuckle humour, especially the Blood libel reference, so as regards a proper schlocky horror romp it did well in that respect.
Top

Just to emphasise if it isn't clear, I'm not accusing the film of being anti-Semitic, if fact it is quite clear the film was the exact opposite.
Top

Thanks for the clarification...
Top

IDK. A mishmash of good and terrible performances. Never quite got to me. had its moments though.
Top
Post Reply
11 posts • Page 1 of 1